Issue includes a free code that can be redeemed for a digital version of the issue. 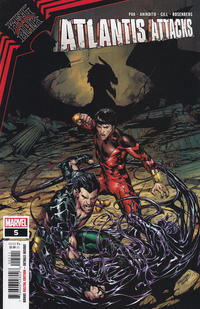 Atlantis Attacks Part 5: Eye of the Storm (Table of Contents: 1)

Artist credits give no distinction between pencils and inks.
Only the cover and the final page refer to the King in Black crossover storyline, suggesting that they were produced later (since this issue was delayed several months due to the 2020 publishing hiatus).