The Death of Professor X (Table of Contents) 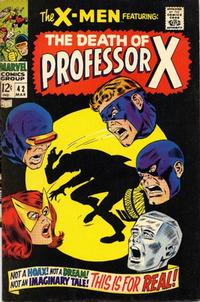 First Line of Dialogue or Text
In the sombre privacy of X-Men HQ, a stridently angry Angel... flanked by the Iceman... rails against an unseen third party!
Genre
superhero
Characters
X-Men Cyclops [Scott Summers]; Marvel Girl [Jean Grey]; Angel [Warren Worthington III]; Iceman [Bobby Drake]; Beast [Hank McCoy]]; V: Grotesk [Gor-Tek]; GS: Changeling (death; as Prof. X)
Synopsis
Grotesk, still seeking his revenge against humanity, looks for a device to accomplish this task - the oscillotron. Professor X attempts to stop Grotesk single-handedly, but fails; Grotesk turns on the device, but the X-Men arrive in time to help destroy the machine before it can cause a massive earthquake. In the aftermath of the battle, Professor X apparently dies.
Reprints
Keywords
oscillotron

The End...Or the Beginning? (Table of Contents: 4)

First Line of Dialogue or Text
To tell the truth, we can think of no better way to begin our senses-shattering chapter, than to quote the very words of the evil mutant named Jack Winters from the final panels of last ish's thriller!
Genre
superhero
Characters
Professor X [Charles Xavier]; Cyclops [Scott Summers] (origin conclusion); Living Diamond [Jack Winters]
Synopsis
The Living Diamond is blasted into atoms in his attempt to destroy Professor X and Scott Summers. Afterward, Prof. X asks Scott to be the first member of his fledgling group whose goal is to create trust between humans and mutants.
Reprints

Scott is given a costume that includes a ruby quartz visor to help control his optic blasts.