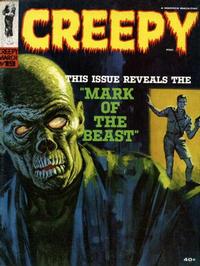 The Mark of the Beast (Table of Contents: 2)

Eye of the Beholder (Table of Contents: 5)