Comic Cavalcade also produced a special run of 1,000 copies of this "Look Sharp" variant, signed by Joseph Michael Linsner on the front cover, and issued with a COA.

Joseph Michael Linsner also offered a hand-lettered run of 26 copies of this "Look Sharp" variant signed and remarked with a sketch by him on the front cover.
This issue is a variant of Dawn (SIRIUS Entertainment, 1995 series) #1. There exist further variants: 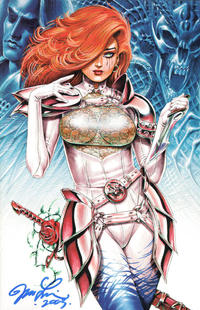