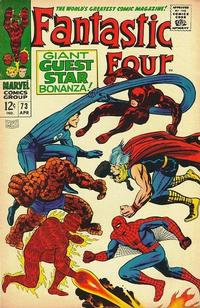 Ties to the stories in Daredevil #38 and Thor #149. Kirby co-plot credit was widely acknowledged by Lee and Kirby in numerous interviews. The credit here reads "Stan (The Man) Lee and Jack (King) Kirby have bestowed another masterpiece upon mankind!"