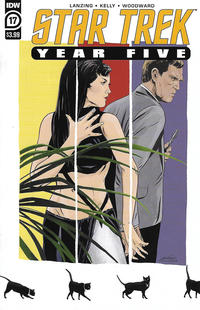 Weaker Than Man (Table of Contents: 2)

First Line of Dialogue or Text
It was five days after Caleb Howell's 35th birthday that the eyes of Aegis turned his way.
Genre
adventure; science fiction
Characters
Gary Seven [Caleb Howell]; Isis; the Aegis; Kolok Five (Vulcan); Azaram Nineteen (Klingon); unnamed Andorian; unnamed Cardassian; Jimi Hendrix; Genghis Khan; unnamed Vulcans; unnamed seamen; Captain James T. Kirk; Commander Spock; Lt. Montgomery Scott [Scotty]
Synopsis
35 year old Caleb Howell is taken from Earth by the Aegis and transformed into a powerful being who is pressed into service as agent Gary Seven who is assigned to protect Earth, with the help of his partner Isis, a woman who can turn into a cat (or vice versa). After serving as a protector of Earth for many years, Gary Seven learns that for the galaxy to survive, all races except the Tholians must be eliminated, and that the only one who can stop him is Captain Kirk and the Enterprise.
Reprints

The previously untold origin of Gary Seven. Includes scenes from the Star Trek episode "Assignment: Earth" where Gary Seven first encountered Kirk and the USS Enterprise. We also now learn the motivations of why Gary Seven tried to kill Kirk in issues #11-12.

Weaker Than Man (Table of Contents: 5)