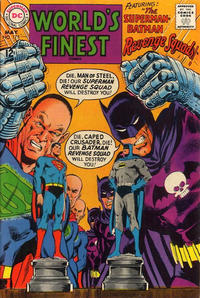 Inks credit is disputed. Neal Adams is one candidate; Dick Giordano is another.

Adams inks are supported by original art collector Victor Lim, and by GCD members Tony Rose, Bob Bailey, and Gene Reed. In a recent checklist of Adams's comics work, Adams claimed the inks (per a report on gcd-main by Allen Ross). The story was published with Adams "art" or "inks" credit in:
• Super-Team Family #1 (1975)
• Superman in the Sixties (1999, p. 4)

Job Number
6622
First Line of Dialogue or Text
This always happens when I screw the body to my car chassis.
Genre
non-fiction
Synopsis
Using a small piece of cardboard to fix screws that have been stripped and won't hold.

Thanks to Jack Corley, Philadelphia, PA.

Part II: To the Victor Comes Death! (Table of Contents: 3)

The Strange Experiment of Dr. Erdel (Table of Contents: 5)

Genre
superhero
Characters
Martian Manhunter (origin); Dr. Erdel
Synopsis
A scientist builds a robot brain which teleports a Martian to Earth. After the scientist dies the Martian is trapped here, so he decides to become a police detective
Reprints