On-sale date from 1966 Periodicals, Copyright Office, Library of Congress.
This issue is a variant of Strange Tales (Marvel, 1951 series) #147.

The Enemy Within! (Table of Contents) 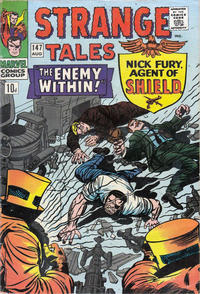 The Enemy Within! (Table of Contents: 1)

Genre
spy; superhero
Characters
Nick Fury; Jasper Sitwell; Dum Dum Dugan; Count Bornag Royale (A.I.M.); A.I.M. (division of "THEM"); Clipper Charlie (barber); Slim; manicure girl
Synopsis
Returning from their latest mission, Fury catches hell from the military brass. Count Royale continues bad-mouthing Fury to SHIELD's board of directors. A general explains to Fury how A.I.M. has technology they desperately need, but refuse to do business as long as Fury's in charge. This confirms Fury's earlier suspicions that A.I.M. is not legit. Royale has returned to an A.I.M. observation post and watches as a squad invades the SHIELD barber shop. Fury, Dum Dum & Jasper save the day. Royale, meanwhile, feels Fury's rash actions have put the last nail in his coffin.
Reprints

Items of Lasting Insignificance from the Four Corners of Marveldom! (Table of Contents: 2) (Expand) /

From the Nameless Nowhere Comes... Kaluu! (Table of Contents: 3)

Genre
superhero; fantasy-supernatural
Characters
Dr. Strange; pharmacist (unnamed); Wong (manservant); building inspector (unnamed); Baron Mordo; Clea (vision; flashback); Dormammu (flashback); Nameless Ones (flashback); Hiram Barney (theatrical agent); The Ancient One; Kaluu (eyes only)
Synopsis
Strange walks the streets of Greenwich Village and after stopping a robbery returns home to find his bills unpaid, his bank account empty, and a city building inspector informing him he has six months to bring his house up to code. He instructs Wong to sell some jewels to pay the bills, checks up on Baron Mordo, thinks back on recent events, and then contacts a theatrical agent, Hiram Barney, about a possible nightclub gig. But he's told magic is "out"-- rock bands are "in"! Just then he's contacted by The Ancient One, who tells him of a most dire menace in the offing, named Kaluu.
Reprints

Part 1 of 22. Unusually light-hearted "break" between 2 very long storylines. While the next 2 years of the series can be broken down into sections, each runs into the next so much it's effectively one single long epic.