Marie Severin's credit per Feran Delgado's site, which features a stat of the original artwork
: http://ferrandelgado.blogspot.com/search?updated-max=2012-04-22T08:25:00%2… 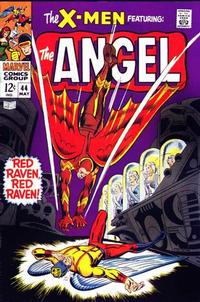 The Iceman Cometh! (Table of Contents: 3)

Genre
superhero
Characters
Iceman [Bobby Drake] (origin; beginning); Robert N. Drake (introduction; Iceman's father); Beatrice Drake (introduction; Iceman's Mother); Judy Harmon (introduction); Rocky Beasely (villain; introduction); Professor X [Charles Xavier]; Cyclops [Scott Summers]
Synopsis
Rocky and his rowdy group of thugs turn up to snatch Judy away from a date she is on with Bobby. Bobby fights back to protect Judy and during the altercation he utilizes his mutant abilities. The townsfolk soon learn of Bobby's abilities, hunt him down and then imprison him.
Reprints

The Senses-Shattering Surprises Go On and On—! (Table of Contents: 4) (Expand) /