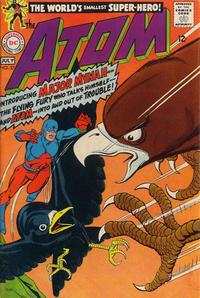 Genre
superhero
Characters
The Atom [Ray Palmer]; Major Mynah (introduction); Viet Minh (villains); Jean Loring; Hawkman [Katar Hol] (cameo)
Synopsis
While Ray Palmer is leading an archaeological expedition in Cambodia, the Atom rescues a mynah bird from a hawk, and the rescued bird leads him to a gang of Viet Minh soldiers trying to rob ancient treasures. He decides to keep the bird, naming it Major Mynah and making it an ally in his fight against crime back home.
Reprints
Keywords
archaeology; Cambodia; mynahs; Viet Minh

The Eyes Have It! (Table of Contents: 4)

First Line of Dialogue or Text
I glued my model together...