Into the Prometheus Pit! (Table of Contents) 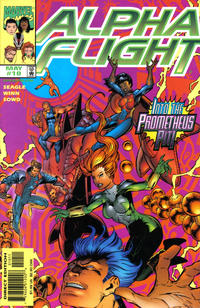 Genre
superhero
Characters
Alpha Flight [Vindicator [Heather Hudson]; Guardian [James MacDonald Hudson]; Puck; Sasquatch; Murmur; Radius; Flex; Manbot]; Micronauts [Arcturus Rann; Marionette [Princess Mari]; Bug; Dexam]; General Clarke; Dr. Myra Haddock; Baron Zebek (villain); Taurus (villain); Virgo (villain)
Synopsis
Alpha Flight confronts General Clarke but he gives them a somewhat convoluted but plausible response. Later Heather is contacted by someone within the department. She goes to meet Dr. Haddock who confirms Heather's suspicions about what's being done to the Alphans. The rest of the team show up chased by Epsilon Guards.Dr. Haddock hides the Alphans by sending them into the Prometheus Pit and into the microverse. Here they meet Baron Zebek and witness his tyranny. On their way to save Manbot, who's been taken to the body banks, they meet up with the Micronauts.
Reprints