Bump in the Night 3 of 3 (Table of Contents) 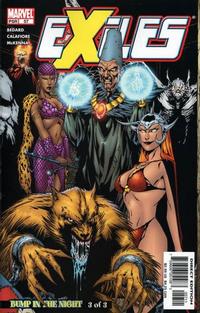 Bump in the Night Conclusion (Table of Contents: 2)

First Line of Dialogue or Text
Thirteen years ago...
Genre
superhero
Characters
Exiles [Blink; Mimic; Namora; Morph; Beak; Heather Hudson [also as Tanaraq]]; Magik [Illyana Rasputin]; Selene; Kulan Gath (death, villain); Morbius (death, villain); Wendigo (villain); Werewolf by Night (death, villain); Zarathos (death, villain)
Synopsis
With the battle for medieval Manhattan turning dire and despite her better judgment, Heather turns into her bestial form but finds herself in the form of the Great Beast known as Tanaraq rather than her usual form of Sasquatch. Tanaraq cuts through the opposition until only Gath is left standing and the monster fulfills the mission given by the Tallus by returning him to his throne--forcefully. With all opposition gone, the Exiles give Selene the necklace of power and she uses it to return Manhattan to its modern state.
Reprints