On sale date as listed in the Catalog of Copyright Entries, Periodicals, 1968, page 250, registration number B474940.

Who Is Scorpio? (Table of Contents) 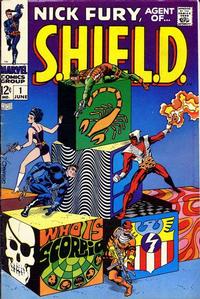 Who Is Scorpio? (Table of Contents: 1)

First Line of Dialogue or Text
Hey, Dugan! Looks like that wraps up your theory!
Genre
spy
Characters
Nick Fury L.M.D.; Nick Fury; Dum Dum Dugan; Pinky (lounge owner); Flip Mason (stand-up comic); Mitch Hackett (racketeer); Val [Contessa Valentina Allegro de Fontaine]; Scorpio [Count Julio Scarlotti]
Synopsis
Fury sneaks into an island fortress, only to get shot in the back. Surprise! It's an L.M.D., and the shooter is the real Fury! But on examination, Dugan informs Fury the L.M.D.'s been shot 4 times, not 3-- which means, someone tried to assassinate him! The only clue is a tiny badge with a "Scorpio" symbol on it. In San Francisco, comic Flip Mason's on the run from gambling debts. In Kansas City, racketeer Mitch Hackett looks forward to joining the mob. In NYC, Fury & Val walk in the rain. At the Monza Autodrome, Count Julio Scarlotti wins a race-- and we see he has a Scorpio tattoo on his wrist. Days later in Nevada, Fury helps test an "EPB G-System" (Entrope Phase Barrier Guard System), a force field which is hoped may one day protect entire armies. As SHIELD prepares one final test (with an H-Bomb!) we see the tech firing the missile has a Scorpio tattoo on his wrist. Fury suddenly realizes the EPB's down, and nobody answers his comm. He races across the desert to a rocket sled used by NASA to escape as the missile descends on the spot he was relaxing. At the U.S. Government Research Center in Las Vegas, everyone's been put to sleep with gas by Scorpio-- when Fury arrives via motorcycle! As the hooded villain speaks of vengeance and "The Parable Of Doom", Fury wonders who the HELL this guy is? Nearby, a mobster mistakes Mason for Hackett and gives him a suitcase of money. Mason takes it, thinking all his problems are gone! Hackett arrives wondering where his suitcase is (not realizing it actually contains a time-bomb), and a gunfight erupts. The two fights intersect paths, and Hackett winds up shooting Scorpio's escape craft, causing it to go up in an explosive fireball, of which Val says, "No one could live through that!" As Mason is about to call his wife, the bomb goes off.
Reprints

First line of dialogue appears on page 4.
Mystery continues in NICK FURY, AGENT OF SHIELD #5 (October 1968). Scorpio's mention of "The Parable Of Doom" seems to suggest a connection with Baron Strucker (see STRANGE TALES #156 / May 1967). However, neither Jim Steranko or Roy Thomas followed up on this potential sub-plot.

The Senses-Shattering Surprises Go On and On-! (Table of Contents: 2) (Expand) /

First Line of Dialogue or Text
"Behold the Savage Sky" proved to me once and for all...
Characters
Nick Fury
Reprints