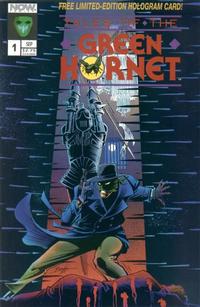 One 3-D card bagged with issue (promo, sequence 4, says "polybagged," but bag is papery and fragile, unlike NOW's other various polybagged Green Hornet issues); splash page of main story credits card to Holographic Dimensions, Inc.; figures are the same as in an inside front cover house ad here.

Genre
crime; superhero
Characters
Green Hornet I [Britt Reid I]; Paul Reid; Margerie ST. Clair (dies); Aaron Vanek (villain, dies)
Synopsis
Sometime in the future, an aging Paul Reid reflects on family history, and the one incident that Britt I would not discuss, though a Sentinel front page clipping and his own journal documented it. 1936: A major, high society party attended by the city's most elite personages is revealed to be a devious trap set by Aaron Vanek, an escaped convict who blames them all for his conviction and five years of incarceration. The mansion is laden with incredible death traps, but among the invitees is Daily Sentinel publisher Britt Reid I, who manages to not only avoid traps, but to overpower one of Vanek's thugs as well. After seeing his date fall to her death, Britt takes the thug's revolver, hat and overcoat, and with an improvised mask, he becomes the Green Hornet. He makes his way to Vanek's control room, where the madman threatens to pull a lever and flood the entire house with poison gas. The Hornet stops Vanek in the only way available, by shooting him to death.