Available as a scan at digitalcomicmuseum.com.
On-sale date is publication date in Catalog of Copyright Entries, 1953 Periodicals, page 100.

He Gambled With Satan and Lost (Table of Contents) 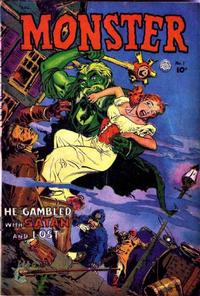 The Monster (Table of Contents: 3)

Genre
horror-suspense
Characters
Dr. Hinsdale; Dr. Gregory; Sylvia Gregory; Harry Ralston; Nicholas [Satan]; Mother Shimley
Synopsis
London, 1853. Scientist Hinsdale works on a potion to alter man for the better. When he transforms a rival into a hideous fiend, he won’t complain either. In the end the beast turns against his creator – who had been tricked all along by the forces of evil.
Reprints

Sequence info by Frank Motler, 2002-08-22. (Per Sandell ed.). Update from actual comic by Jim Ludwig 2005-09-02.
Art looks familiar and like the artist on some Hell's Angels stories in Sparkling Stars.

The Mirror (Table of Contents: 4)

Sequence info by Frank Motler, 2002-08-22. (Per Sandell ed.). Update 2005-09-02 by Jim Ludwig. Story contains some Milt Caniff Dragon Lady Swipes as well as some good girl art swipes that look like they came from Blue Beetle.

First Line of Dialogue or Text
"Pulling boners" on stamps, as described in a previous article, is the making of embarressing mistakes by engravers who produce the designs which appear on stamps.
Genre
non-fiction
Synopsis
Mistakes made on stamps.

Genre
horror-suspense
Characters
Willie the Weeper; Jonathan; John B. Fletcher; Anton
Synopsis
Foreign agents use a derelict house to hide and torture an American scientist. Ghosts from the past come to the rescue.
Reprints

The Philosopher's Stone (Table of Contents: 8)