All stories list a 1945 copyright to Louis Ferstadt. Ferstadt was an artist and also ran his own comics shop at various times, so the content of this comic was most likely all a product of this shop. 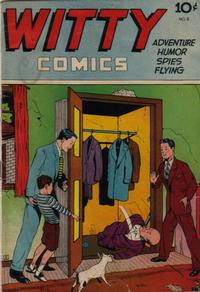 Genre
superhero
Characters
Pioneer [John Doe]; Braggy (villain); Trigger (villain); Blabber (villain); Butch (villain); Mr. Randall (villain); Senator Podge (villain); Major Sterrill (villain)
Synopsis
Superhero Pioneer saves a child who is nearly run over by members of gangster Braggy's mob, but the crooks escape. Braggy decides to move his racket into defense work. 2 years pass, and Pioneer discovers Braggy's gang is involved in large-scale government and business corruption. He poses as a would-be defense worker and refuses to pay off the crooks to get a job. They abduct him to make him an example of others, and when Pioneer has identified the "big shots" behind the scheme, he defeats them.
Keywords
Daily Express

The features in this comic were produced by Ferstadt's comic shop; this story looks the most like Ferstadt's own work.

In the first part of the story, Pioneer speaks with an exaggerated "old-time" accent: "Dat thar papoose--must rescue it first! Then I will attend the gun-toter!" However, after two years, he speaks perfect English at all times.

First Line of Dialogue or Text
Post war transportation will be swift
Genre
adventure
Characters
Dick Royce; Ricki; King Mula; Na-Ki; Ricki's father; Slim
Synopsis
Dick Royce flies to Africa to arrange for an airstrip in the jungle. He discovers New York gangsters are trying to force a missionary to reveal the location of the elephants' graveyard so they can steal the ivory. The local witch doctor conspires with the crooks to eliminate King Mula in exchange for the ivory, but Dick foils their plans.

On page 7, Na-Ki tells Ricki "Bad men come to village and kill King Mula and your father!" but in the last panel on page 8 King Mula is still alive and grants Dick permission for the airfield.

First Line of Dialogue or Text
Steeltown, a thriving midwestern metropolis.
Genre
science fiction
Characters
Steve Hagen; Azarro; Mazda; Sunbo
Synopsis
The residents of Steeltown think rival city Blastville is bombarding them with ancient artifacts but Steve proves the objects are coming from the floating city of Stratosphere Island. An "Aztec" faction and "Modern Party" faction are battling there and the objects were accidental "fallout" of that conflict. Steve proves the leaders of the faction are conspiring against their subjects in an attempt to take over the aerial city. He returns to Steeltown and prevents them from retaliating against Blastville.

This story seems to be contemporary but it portrays a very odd situation where one American city would consider using a missile to attack a rival city.

"Naturally, when the old lady wanted to give me a dog" (Table of Contents: 10)

First Line of Dialogue or Text
Weeny and Pop are not exactly lazy
Genre
humor
Characters
Weeny; Pop
Synopsis
Weeny and Pop give away their dog to an attractive redhead.