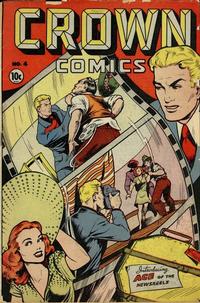 Genre
non-fiction; aviation
Synopsis
Feature on the Boeing B-17

Adventure of the Black Pearl (Table of Contents: 3)

Altman is credited on Crown Comics by Jerry Bails' Who's Who. The grinning faces are identical to his signed stories in Camera Comics #6 and #8. Also the small sharp, pointed "bracket"-like lines on the upper nose on page 4 and 5, and movement of figures. Also his way of rendering folds in trousers is unique, as is his hatch inking of the black man and skirt of the lady, with hundreds of lines.

Charles Manning credited in byline. At the bottom of the first page it reads: "Crazy Like A Cop--S.M. Iger"

Genre
humor
Characters
Marvin; Uncle Harry; Jeeves; Debby
Synopsis
Marvin causes trouble for Uncle Harry in a scheme to get a raise in his allowance.