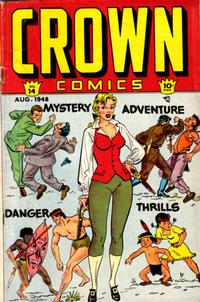 The letters are integrated in the drawings.

The Case of the Unused Evidence (Table of Contents: 2)

Script credits suggested by Bails' Who's Who.

First Line of Dialogue or Text
In the dense jungle beyond the limits...
Genre
jungle
Characters
Voodah; Zanzi; Cheeko (monkey); T'Wonda; Jinah (villain); Raynes (villain); Bruno (villain)
Synopsis
Zanzi and her brother are ambushed by a brutal trio. T'Wonda is killed and Zanzi taken along to act as a sun goddess in a scheme to take over a mine.

Cataldo is credited on both pencil and ink on this feature by Jerry Bails' Who's Who, and the eyes and eyebrows of faces, and the little awkward way of standing point to him. Some copying from Hogarth's Tarzan. Cataldo is very often mixed up with Ruben Moreira, and JVJ has both Moreira and Cataldo here, but this is only Cataldo. Compare the signed Cataldo story in issue #17, and there is no difference. Only one face on page 7 is like Moreira. Moreira's body movements are much more writhing and twisting with long arms and legs as in Kaänga.

Signed AC on left side of splash panel.

First Line of Dialogue or Text
The French and English had been rivals...
Genre
historical
Characters
Bart Stewart; Musket (surveyor); Filippe (French fencing master); Saba
Synopsis
Fort Necessity is under siege by the French and their Indian allies.

Synopsis
Learn to speak Spanish, and learn to fight and wrestle.

Synopsis
Talk and sing through your own radio with Home Radio Mike.

Make Your Own Records (Table of Contents: 10)

Synopsis
Enjoy making records in the privacy of your own home.