Stormy Return of the Red Tornado! (Table of Contents) 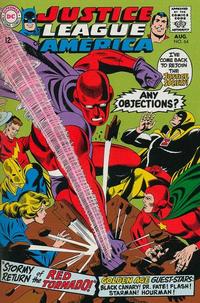 The Stormy Return of the Red Tornado! (Table of Contents: 1)

Genre
superhero
Characters
Justice Society of America [Atom [Al Pratt]; Black Canary [Dinah Drake Lance]; Dr. Fate [Kent Nelson]; Dr. Mid-Nite [Charles McNider]; Flash [Jay Garrick]; Green Lantern [Alan Scott]; Hawkman [Carter Hall]; Hourman [Rex Tyler]; Mr. Terrific [Terry Sloane]; Sandman [Wesley Dodds]; Starman [Ted Knight]] (of Earth-2); Red Tornado [Ma Hunkle] (image); Flash [Barry Allen] (of Earth-1, flashback, cameo); Green Lantern [Hal Jordan] (of Earth-1, flashback, cameo); T. O. Morrow (villain); Red Tornado
Synopsis
At one of the JSA's meetings, a new Red Tornado interrupts the group, claiming he is the original one, when the JSA knew the original one (Ma Hunkle), who just as suddenly as she entered in on their first meeting left. They give this new Tornado a chance to show his heroism, but every time the JSA is about to defeat a group of criminals, the Tornado interferes, causing them to "die" in battle. Helpless to stop this, he goes to Earth-1 to enlist the JLA's aid, since he learns it was T.O. Morrow who was behind the JSA's "deaths."
Reprints