In late 1989 Marvel adjusted their cover dates so that they were only two months ahead of schedule instead of four, hence the "Mid December" cover date. A full month passed between the publication of this issue and the two issues surrounding it.
This issue is a variant of The New Mutants (Marvel, 1983 series) #84. There exist further variants:

...To Enter the Hive of Doom! (Table of Contents) 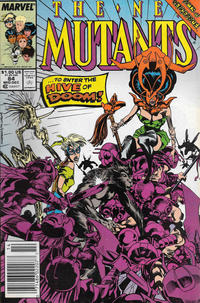 The Sword's Edge (Table of Contents: 1)