Will He Save the West - or Ruin It? (Table of Contents) 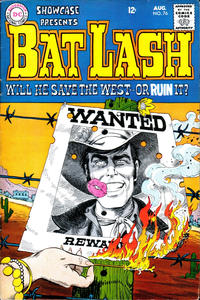 First Line of Dialogue or Text
Bat Lash! Draw!
Genre
western-frontier
Characters
Bat Lash (introduction); a curvaceous cook; townsfolk; cowboys; gunmen
Synopsis
Bat Lash wears a flower in his hat, loves pretty women and fine food, declares, "I hate violence!" but stumbles into trouble time and again. He flees an angry boyfriend, shoots a pheasant on the way to the town of Welcome. He requests the delicious cook prepare pheasant in aspic, and tours the town procuring supplies, punching, shooting, and clobbering villains at every turn. He's cleaned up the town, and sits to eat his pheasant - which the cook poisoned! She's the mastermind, and Bat graciously escorts her to jail. He rides out, having lost his taste for pheasant.
Reprints

Per interviews with Sergio Aragonés, Joe Orlando, and Carmine Infantino in Comic Book Artist #1 (Spring 1998), numerous hands were involved in the conception of Bat Lash. Carmine Infantino and Joe Orlando came up with the name and general concept and turned it over to Sheldon Mayer. Mayer's first story was rejected, and the concept was passed to Aragonés, who wrote and laid out this first story. Denny O'Neil was brought in as scripter with Bat Lash #1, or possibly the story in this issue. A previous indexer credited Nick Cardy as co-writer.

This New Aurora Hobby Kit Is 33 Years Ahead of Its Time! (Table of Contents: 2) (Expand) /

Be My Guest at America's Greatest Amusement Park (Table of Contents: 6) (Expand) /

Whatever Happened to the Guy Who Us'ta Draw The Flash, or, Carmine WHO??? (Table of Contents: 7)