Indexed from scanned copy at http://comicbookplus.com/

Flight from Love! (Table of Contents) 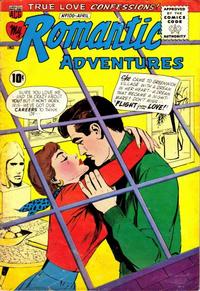 Flight from Love! (Table of Contents: 1)

Genre
romance
Characters
Nick Moreno; Iris Hanson; Wally Harris; Mrs. Hanson
Synopsis
Iris leaves her hometown boyfriend Wally to fulfill her life-long dream of becoming an actress in New York. She falls in love with fellow actor Nick while waiting for her big break. Wally visits but she considers him a “hick” and turns down his marriage proposal. Nick, on the other hand, has no intention of marrying Iris. Iris is advised she’ll never become a professional actress, and Nick marries someone else. So she goes home and will marry Wally after all.

You've Got to Think You're Beautiful! (Table of Contents: 3)

Genre
romance
Characters
Francie Browning; Ted Armbruster; Professor Everett Nelson; Elvira Anson; Frank; Ed
Synopsis
Francie grows up convinced she’s unattractive. She’s rejected by her crush Ted. Everett, a university professor “who’s made a study of beauty in the American culture,” tells Francie about a homely girl who believed she was beautiful and people treated her that way. Francie has “all the qualities that could make for beauty” but her poor self-image makes her seem plain. Everett puts Francie through a strict makeover regimen. Francie wins the Miss Indiana beauty pageant and now Ted is interested in her, but she discovers she doesn’t want him. Francie and Everett have fallen in love.
Keywords
beauty pageant

Genre
romance
Synopsis
Women who remember their boyfriends' preferences are more likely to get that wedding ring.

Heart of the Northland! (Table of Contents: 6)

Genre
romance
Characters
Sally Merritt; Johnny Edwards; Chuck Forrest; Aunt Helen
Synopsis
Sally is determined to become a famous skier, and deprecates Johnny because he is more interested in going to medical school. She even thinks he may be a coward. Olympic champion Chuck trains Sally and also makes romantic overtures when they're in a mountain cabin. Johnny appears and warns Chuck and Sally that a blizzard will soon close the trails, trapping them, and Sally insists they take a dangerous route back home. Chuck proves to be a coward on the trip and Johnny has to rescue him. Sally now realises Johnny is the man for her.
Keywords
skiing