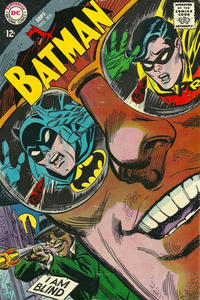 Genre
superhero
Characters
Batman [Bruce Wayne; also as a blind man]; Robin [Dick Grayson]; Commissioner James Gordon; Alfred Pennyworth; two armored car drivers; The Schemer (villain); Schemer's gang (villains); Brain Drain (villain, Schemer's pet owl)
Synopsis
The Police, believing that the Batman is dead, arrest and take in the Batman whom they believe is an imposter, while the real Batman, disguised as a blind man, aids Robin to prevent an armored car robbery. Robin is captured by the Schemer in the process but Batman outwits the Schemer in his attempt to down a plane loaded with gold.
Reprints
Keywords
Gotham City