The Blackout Terror! (Table of Contents)

Bob Rogers verified doing the backgrounds to this cover in an interview w/Roger Hill in Alter-Ego #7 (Winter 2000). 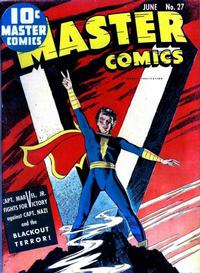 The Ring-Master Presents (Table of Contents: 2)

The Blackout Terror! (Table of Contents: 3)

Alter-Ego #6 (Autumn, 2000) features an article on Mac Raboy by Roger Hill, and on page 12, displays the last page of this story, revealing that the majority of the figures used were "paste-ons" [many of which had fallen off the original art], a tactic often used by Mac Raboy because of his slowness and running up against story deadlines.

Oddity: on page 10, panel 4. Captain Marvel Jr. mentions his heroic name, but does not change back into Freddy Freeman.

Oddity: on page 11, panel 2, Captain Marvel Jr. mentions the name of Captain Marvel, Senior, but does not change back into Freddy Freeman.

The last panel on page 14 gives the title of next issues' story: "Hitler's Headquarters of Horror".

First Line of Dialogue or Text
I see the point, Dad!
Genre
humor

[The Reformation of Duke Durkin] (Table of Contents: 10)

The Feather Thief (Table of Contents: 11)

Genre
western-frontier
Characters
Marshal Buck Jones; Silver (his horse); Mesquite Mike (deputy); Uncle Sassafras; Indian Joe
Synopsis
A bank has been robbed and the only clue is a large feather.

Carlson is best recognized by his horses: long narrow, tapering heads and on the first page, the horse running with front legs stretched out like a rocking horse.