You Decide! (Table of Contents) 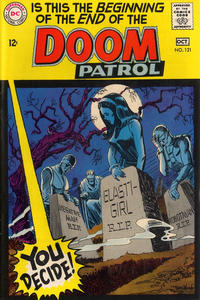 The Beginning of the End! (Table of Contents: 1)

Genre
superhero
Characters
Doom Patrol [The Chief [Niles Caulder] (death); Elasti-Girl [Rita Farr] (death); Negative Man [Larry Trainor] (death); Robotman [Cliff Steele] (death)]; Murray Boltinoff; Bruno Premiani; Mento [Steve Dayton]; Wilmer Boggs; Captain Zahl (villain); Madame Rouge (villain); Brotherhood of Evil [Monsieur Mallah (death); The Brain (death)] (villains)
Synopsis
Madame Rouge plans to eliminate both the Brotherhood of Evil and the Doom Patrol. She bombs the Brotherhood's headquarters, killing the Brain and Mallah, then she attacks the Doom Patrol. They survive, but the attacks are endangering others in the city, so they move to a new base on a Carribean island. Rouge and her ally Captain Zahl, an old enemy of the Chief's, trap them with weapons that rob them of their powers. They are given a choice: either allow themselves to be blown up, or the villains will blow up a small town in Maine. The heroes heroically choose to sacrifice themselves.
Reprints

Death of the Doom Patrol.

It is later revealed the Robotman survives the explosion, and becomes part of the New Doom Patrol in Showcase (DC, 1977 series) #94. Robotman would later team up with Gar Logan, then called Changeling, and the rest of the New Teen Titans to hunt down Rouge and Zahl in New Teen Titans (DC, 1980 series) #13-15.

In this issue, Robotman mentions utterly defeating "Mr. 104," but when last seen in #106 this villain was called "Mr. 103," and he got away scot free. In his next appearance, Teen Titans Spotlight (DC, 1986 series) #9, he explains to Robotman how he had managed to survive their last encounter, which an editor's note identified as being in DP #106. Sometime between #106 and #121, an untold fight between the original Doom Patrol and Mr. 103, now calling himself Mr. 104, must have occurred.