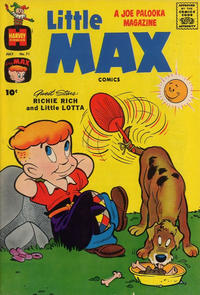 Tale of a Tail (Table of Contents: 1)

Genre
humor; children
Characters
Little Max [as himself and Little Max Sambo]; Alice; Little Max Sambo's mother; three talking tigers
Synopsis
While Alice goes into a store to buy some butter for her mother, Max imagines himself as the protagonist of the story of Little Sambo (see notes).
Reprints

The story in which Max imagines himself, written in 1899 as "Little Black Sambo", was very popular for a good half-century but now both the story and the term "sambo" are considered by many to be racially offensive. More detail on the story and its controversial history can be found at [http://en.wikipedia.org/wiki/The_Story_of_Little_Black_Sambo]. Presumably, public sentiment against the story was not yet widespread enough for the Harvey editors to be aware of it when the story was first adapted for Little Max in 1955 and reprinted again in 1961.

Genre
humor; children
Characters
Little Max; Casey; unnamed pedestrian
Synopsis
Max and Casey decide to pack lunches and go for a hike. Each goes home to pack their lunch, and upon rejoining, Max is surprised to see Casey lugging a heavy suitcase with his. When they finally stop to eat, Max is surprised by what Casey has packed for lunch.
Reprints

Wouldn't It Be Funny! (Table of Contents: 5)

Size Isn't Everything (Table of Contents: 6)

Genre
humor; children
Characters
Little Max; Casey
Synopsis
Max and Casey visit the town dump to see what they can salvage. Casey is perplexed when Max finds an old slipper and searches for its mate, since the slippers are much too large for Max. Max finds the second slipper, then rushes home, collecting some dirt and discarded flowers along the way. The perplexed Casey follows along to see what Max is up to and can't believe Max's ultimate goal - creating a small indoor garden by nailing the slippers to the wall as plant holders.
Reprints

The Magic Mirror (Table of Contents: 7)

Genre
humor; children
Characters
Lotta Plump [Little Lotta]; Attol; three unnamed boys
Synopsis
While looking at items in her attic, Lotta finds an old mirror. Falling asleep in a comfortable chair, she dreams that the mirror is magic and that she can step through it and visit her reflection, whose name is Attol (Lotta backwards). Attol is the opposite of Lotta in every way and does not approve of Lotta's unladylike demeanor. Her comments begin to frustrate Lotta and eventually they come to blows. Lotta steps back through the mirror to where she is sleeping, and upon awakening, she is relieved to see that the mirror is not really magic - or is it?

Genre
humor; children
Characters
Billy; Mary; department store staff; Mary's birthday party attendees
Synopsis
Billy receives an invitation to Mary's birthday party, but worries that he has almost no money and and won't be able to give her a present that will compare with those from the other children attending the party. After a disappointing trip to the department store, he comes up with an idea for a present that costs him nothing. Will Mary like it?
Reprints

Genre
humor; children
Characters
Bobby Brown; Mrs. Brown; Mr. Sleep
Synopsis
Bobby wishes he could avoid sleep indefinitely, but when he has a dream in which exactly that happens, it changes his perspective.
Reprints

Genre
humor; children
Characters
Richie Rich; Gloria Glad; Richie's cousin Nancy; Billy Bruce
Synopsis
When Gloria sees Richie's cousin Nancy kissing him goodbye, she becomes jealous and refuses to see him or listen to his explanations. Richie tries disguising himself as the electric meter man in order to have another chance to explain, but the disguise fails and she kicks him out again. Gloria eventually softens and decides to be more understanding on their next meeting. She next answers the door for Billy Bruce, who looks just like Richie with glasses. Gloria invites him in, thinking it is Richie in another disguise, but Richie sees her with Billy, making him the angry one this time.