Only Angel and the Ape tryout issue. On-sale date from copyright registration.

First Line of Dialogue or Text
Drop the pen, Sam! I have a feeling our first case is here!
Genre
humor
Reprints 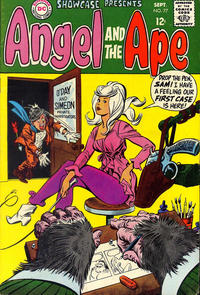 First Line of Dialogue or Text
Boy, wouldn't it be rotten...
Genre
humor
Characters
Angel O'Day; Sam Simian (a gorilla); Trumbull; gangsters; cops; Stan Bragg; Tex Bumblewell (parody of inker Tex Blaisdell); a zookeeper
Synopsis
Trumbull, with his leg in a cast, stumbles into O'DAY AND SIMEON, PRIVATE INVESTIGATORS. Angel is a crack PI and judo master. Sam is a gorilla who draws comic books. Sam delivers his latest art to Stan Bragg, publisher at BRAINPIX PUBLICATION, INC. Angel protects Trumbull from kidnapping, but they're nabbed. Sam races across the city (nobody noticing he's a gorilla in a suit) to the zoo. Angel wiggles out of her bonds as Sam avoids death traps. The zookeeper nabbed Trumbull for his cast, since the bandages contain "super rocket" plans - for a ride at Disneyland!
Reprints

There is no definite conclusion on who wrote this story. In Amazing World of DC Comics #10, January 1976, in "There's No Cases Like Showcases", Jack C. Harris wrote, "Orlando was up again with... Angel and the Ape... by E. Nelson Bridwell, Al Jaffee, Bob Oskner, and Tex Blaisdell... with the cover idea of [Sergio] Aragones. In the letters column of Adventure Comics #414 (January 1972), when a fan recalls AATA, E. Nelson Bridwell replies, "That was a creation of Publisher Carmine Infantino, Editor Joe Orlando, and yours truly... with Bob's art." On The Drawing Board #67, June 1968, credits Bridwell with plot and Howie Post with script. Other writers cited in the past include Howie Post and Bob Kanigher (creation and writing).

Enemy Ace Is Back! (Table of Contents: 3)

Synopsis
Review of the fanzine STAR-STUDDED COMICS, funny graffitti such as "Neal Adams is a One-Liner!", and promo for THE GEEK.