Genre
children
Characters
Little Max
Synopsis
Max stands on a ladder, painting the top portions of a wall and wearing a fishbowl on his head to keep the paint from dripping on him. 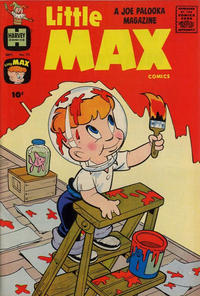 Genre
children
Characters
Little Max; Casey
Synopsis
Max finds a single old roller skate in the street and has an idea for a way to use it. Casey thinks Max is doing something ridiculous, so he walks off to find other friends to play with. Max builds a a go-cart with the skate and other materials, and when Casey sees it he suddenly likes Max's idea.

On the Beam (Table of Contents: 2)

Genre
children
Characters
Little Max; Casey; Joe Palooka; Ann
Synopsis
Max and Casey climb up into a building that is under construction after the workers have left for the night. Both nearly fall from a height, and Max is only saved by his pants catching on a nail. Despite the danger he has barely avoided, Max is more concerned by his embarrassment when Joe has to retrieve him from his precarious perch and the fact that his pants are ripped.
Reprints

The Piper (Table of Contents: 3)

Genre
children
Characters
Little Max; Joe Palooka; Alice; unnamed boys
Synopsis
Max indicates that he can't go for a walk with Joe because he is busy playing basketball. Joe is perplexed because Max is only watching from the sidelines. However, the boys who are playing insist that Max is their "piper" and the most important player on the field. Soon the ball goes out of bounds and rolls into a nearby pipe. Max is the only one small enough to go in the pipe and retrieve the ball.
Reprints

Genre
humor
Characters
Humphrey; Ichabod
Synopsis
Humphrey runs after Ichabod, who has something important he wants to show Humphrey. In the process, Humphrey falls down a hill, through a covered bridge and into the water beneath. After all that, Ichabod had just wanted to show Humphrey that the water was warm enough to go swimming.
Reprints

Genre
children
Characters
Little Max; Joe Palooka; Alice
Synopsis
Joe shows Max and Alice some native African items he has collected - a shield, a spear and a witch doctor's mask. Max tries them on, and is so frightened when he sees his reflection in the mirror that he hides behind a chair.
Reprints

The Ghost of the Mansion (Table of Contents: 8)

Genre
children
Characters
Richie Rich; Cadbury; unnamed maid; Richard Rich; Regina Rich
Synopsis
Richie wants to explore portions of the mansion which he has never seen. With a wink to a nearby maid, Cadbury advises Richie against exploring, as he might encounter the "ghost of the mansion." Richie doesn't believe him, and pretends to take a nap then slips away to explore. As Cadbury takes something to a store-room, he and the maid hear sounds that Richie is making as he finds items in his exploration - an old organ, drums, a chain and a trumpet. Cadbury and the maid assume it really is a ghost and run from the mansion, resigning as they pass Mr. and Mrs. Rich on the way out.

While the butler in this story is named Cadbury, he bears little resemblance in appearance or demeanor to the long running character of the same name that was introduced only a month or two earlier in Richie Rich #5. He looks instead like the butler named Harkins in Richie Rich #8 and other issues around this time, complete with full head of hair and red striped socks. Definitely an editorial oversight. The "real" Cadbury was soon given a distinct personality in Richie Rich #9 ("The Boy and the Butler"), and that version shortly became the only butler we ever saw thereafter, perhaps in part because the butler in this Little Max issue resigned at the end of the story.

Genre
humor
Characters
King Harold; Prince Frederick; royal bugler; villagers; royal pages; shopkeeper; palace guards
Synopsis
The cruel Prince Frederick forces his subjects to get up very early in the morning while he himself sleeps in every day. Then a clever shopkeeper turns the tables on him, forcing the Prince to change the unpopular policy.
Reprints

Genre
children
Characters
Lotta Plump [Little Lotta]; Mr. Plump; Mrs. Plump; assistant chief lifeguard; Chauncy; Oswald; Roger Van Snoot; Chauncy's mother; country club members; J.F. Filbert
Synopsis
Lotta's father is being considered for membership at a snooty country club and takes the family there to go swimming. He warns them to be on their best behavior so that they will be approved for membership. To his dismay, Lotta very quickly does several things that Mr. Plump is certain will get them kicked out. He gets even more concerned when his boss, who recommended them for membership, shows up and Lotta accidentally knocks him in the pool. In the end, Lotta gets a job there as a lifeguard and Mr. Plump is denied membership because he is perceived as being someone who can't relax.
Reprints