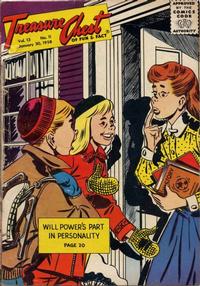 First Line of Dialogue or Text
Another game's over -- and we're under.
Genre
drama
Characters
Chuck White; Stuart "Flagpole" Boyd; Reggie; Vince; Mike Kelly; Edgar; Mr. Grew
Synopsis
The basketball team is performing poorly and Mike Kelly talks Flagpole into rejoining the team. Mr. Grew calls Chuck into his office and assigns him to find out if there's any truth in the claim that Flagpole had been hazed by jealous teammates. Reggie and Vince plot to get rid of Flagpole for good.

The Making of a Knight (Table of Contents: 3)

Genre
historical
Synopsis
A look at knighthood, from becoming a Page when a young boy, then a Squire at age 14, to finally being knighted at age 21.
Keywords
joust; lance; Page; Squire

Genre
religious
Characters
Jesus
Synopsis
The history and significance of candles in the Catholic Church.

First Line of Dialogue or Text
Well, if it ain't the good padre!
Genre
adventure
Characters
Jim Crandall; Fuzzy; Fullerton; Father Pierre; Sandy McTavish; Millie; Martha; Scotty
Synopsis
Father Pierre runs across the fur thieves and hints to them that Fullerton is cooperating with the authorities. Putting Jim Crandall's plan into action, Father Pierre allows the women in town to spread gossip about Scotty being found in an Indian village. Fullerton skips town abruptly, fearing he'll be named as the boy's abductor and the leader of the fur thieves.

Genre
non-fiction; historical
Characters
Christopher Columbus
Synopsis
A look at Indians, from the time of Columbus to the present day.

inside back cover; pantomime