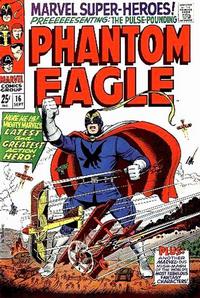 The Phantom Eagle (Table of Contents: 2)

Job Number
E-960
Genre
superhero
Characters
Original Human Torch [Jim Hammond]; Toro; The Un-Human (Introduction); Comrade X (Introduction; no appearance); Dr. Carter
Synopsis
A spaceship flies over the city dropping a message from Comrade X of the Red Planet, stating that earth must be destroyed so that his world's growing population can survive. A gigantic, monstrous eight headed creature wreaks havoc on the city and the flaming duo tackle it, but the creature is fireproof. Its fang-like tongue poisons Toro but The Torch rushes him to Dr. Carter, who tells him the boy's life can only be saved by a blood transfusion; luckily the Torch has the same blood type. As buildings continue to be destroyed the Torch uses the Doctor's chloroform to knock the creature out.
Reprints

At the time of its printing Marvel was unaware that the Torch story was unpublished 1950s inventory. Chronologically, this story takes place between Captain America #78 and Avengers #134 (flashback).

The sequence in which the wounded Toro requires a transfusion from the Torch echoes the untitled Human Torch story in Marvel Mystery Comics (1939 series) # 19.

The Cargo of Death! (Table of Contents: 4)

title from cover; Stan Lee writer credit removed based on information from the Timely/Atlas discussion list