Where Flies the Beetle! (Table of Contents) 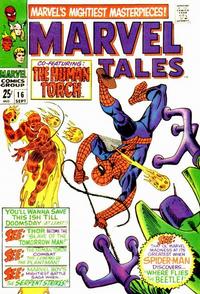 Inside front cover featuring scenes from interior stories, with graytones and corrections by John Verpoorten.

Genre
superhero
Characters
Spider-Man [Peter Parker]; the Beetle [Abner Jenkins]; the Human Torch [Johnny Storm]; Betty Brant; Flash Thompson; Aunt May Parker; Doris Evans; J. Jonah Jameson
Synopsis
When the Beetle is released from prison he plans to take his revenge on the Human Torch and ends up fighting both the Torch and Spider-Man.
Reprints

The Serpent Strikes! (Table of Contents: 3)

Genre
superhero
Characters
Marvel Boy [Bob Grayson]; a snake worshiper (introduction, death, villain)
Synopsis
A woman from an Indian snake worshiping cult follows a stolen snake to the United States and takes revenge on the zoo that has it.
Reprints

The Coming of the Plantman! (Table of Contents: 4)

Genre
superhero
Characters
Human Torch [Johnny Storm]; Doris Evans (introduction); Plantman [Sam Smithers] (gardener) (introduction); Mr. Evans (Doris' father) (introduction)
Synopsis
Johnny has a date with Doris Evans, who drives him crazy as she's the only girl he's gone out with who's not impressed with his being The Torch, and prefers him as "Johnny". He sees her father fire his gardener, Sam Smithers, for "fooling around" with an invention designed to increase the intelligence of plant life. Shortly, in a "million-to-one freak accident", lightnight strikes and alters Sam's device so "it works!" Not only does it increase plants' intelligence, they also follow his mental commands. Donning a costume, he robs the store where Doris' father works and plants evidence to frame him for the crime. Johnny swears to clear Evans' name. Soon Johnny & The Plantman are engaged in battle, and The Plantman demands the city be turned over to him! (Talk about rising megalomania.) Johnny manages to break the plant-device, but The Plantman gets away, promising himself, "Next time my plan will be foolproof!!"
Reprints

1st appearance of The Plantman, whose costume resembles that worn by The Shadow; he would redesign his costume & return in STRANGE TALES #121 (June 1964). 1st appearance of Doris Evans, who would continue as Johnny's semi-reluctant girlfriend until the end of his solo series.

Slave of Zarrko, the Tomorrow Man! (Table of Contents: 5)