Inside front cover and inside back cover are blank. Portions of the back cover may contain ads from various businesses that offered the book as a premium - or may be blank.
This issue has variants:
Keywords
giveaway premium 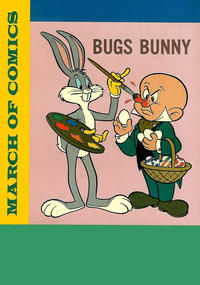 First Line of Dialogue or Text
Quit gwiping! It's your own fault for always sneaking aboard my archeological expeditions!
Feature Logo

Bugs Bunny [Western Logo 2 Horseshoe-Like Letters]
Genre
anthropomorphic-funny animals; humor
Characters
Bugs Bunny; Elmer Fudd; striped dragon; the Clan Murrigawnigarrilawniger
Synopsis
On an arctic expedition, Bugs and Elmer find a huge frozen striped egg. While transporting the egg back home, it falls out of Elmer's plane and into the sea, where it drifts toward land and is claimed by two members of the Clan Murrigawnigarrilawniger. Bugs tricks them into returning it but, before our heroes can leave, the egg (now free of the arctic cold) hatches into a striped dragon.
Keywords
arctic; dragon; egg; far-off land

Three tiers per page. This story has rectangular dialogue balloons, in accordance with the “Early Gold Key style” that was in effect at this time at Western Publishing.

When creating what is certainly a contender for the longest non-hyphenated surname ever to appear in comics with "Murrigawnigarrilawniger", writer Don R. Christensen appears to have thrown in everything but the proverbial kitchen sink - including the three letters "arr". Don would often refer to himself in writing as "Don Arr Christensen" (or just "Don Arr") to differentiate himself from whom he said were two other "Don Christensens" who also worked in animation. (Per 1990s conversation with Joe Torcivia)

First Line of Dialogue or Text
To play Bugs Bunny's Easter Egg Hunt Game, you will need a large flat button, with the sides numbered "1" and "2" and smaller, different colored buttons for "men".
Genre
anthropomorphic-funny animals; humor
Characters
Bugs Bunny
Synopsis
Advance your button ("man") through a trail of Easter eggs, following different instructions along the way, until you reach the "Happy Easter" egg at the end of the trail.
Keywords
board game

Illustration shares back cover space with logo and ad copy for whichever firm is distributing the issue as a giveaway premium. Illustration comprises top third of page, lower two thirds can be blank if no named sponsor.