Inside front cover and inside back cover are generally blank. Portions of the back cover may contain ads from various businesses that offered the book as a premium - or may be blank.
This issue has variants:
Keywords
giveaway premium 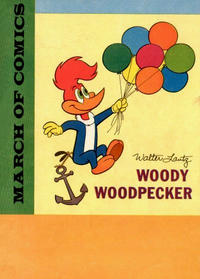 First Line of Dialogue or Text
Great Uncle Woodleg has a river named after him!
Genre
anthropomorphic-funny animals
Characters
Woody Woodpecker; Knothead; Splinter; Uncle Woodleg (hanging portrait only); Uncle Beakly (hanging portrait only); various members of the Explorers' Society; head of the Explorers' Society; two treasure-seeking fugitives, guardian of the pyramid treasure, natives
Synopsis
Knothead and Splinter gush over a string of portraits of Woodpecker ancestors who have made great discoveries, and cajole Woody into following in their footsteps. Knothead even nags Woody in a dream. An Explorers' Society informs Woody of a region in the "Jungles of the South" where new volcanoes have been known to form and, with the Society's backing and helicopter, the Woodpeckers set off to find and name "Mount Woody". They locate an uncharted volcano, but is it what it appears to be?
Reprints
Keywords
ancestors; discoveries; exploring; far-off land; helicopter; jungle setting; treasure; unlikely hero; volcano

An abbreviated version of this story, eliminating the "exploring and discovery" angle, will later appear as "Perilous Paradise" by Vic Lockman and Pete Alvarado, in Daffy Duck (Western, 1962 Series) #49 (June 1967).

First Line of Dialogue or Text
Someone has switched the signs on the cages of the zoo animals.
Genre
anthropomorphic-funny animals
Characters
Woody Woodpecker; Knothead; Splinter; Wally Walrus
Synopsis
Decipher the animal cage signs, which are written in a combination of letters and pictures
Keywords
word puzzle

Knothead and Splinter are learning to draw with ABC's! (Table of Contents: 4)

First Line of Dialogue or Text
How many letters did they use?
Genre
anthropomorphic-funny animals
Characters
Knothead; Splinter
Synopsis
Identify the letters, names, and words, hidden within Knothead and Splinter's drawing.
Keywords
picture puzzle; word search

The balloons with floating heads comprise the top third of the back cover. The remaining 2/3 of the back cover space is left blank to contain the name and logo of the business using the comic as a promotional item. The "March of Comics" logo runs three-fourths of the way down the far right side of the page.