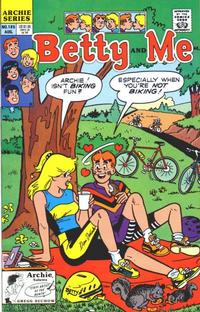 Fit to Be Tired (Table of Contents: 2)

Victor Gorelick says Archie Comics will be at the Great Eastern Comic Book Convention and 21st San Diego Comic-Con. He also gives tips on submissions to the Archie Club reporters.

Credits are "by Gladir, Goldberg, & Ollerenshaw".

First Line of Dialogue or Text
I like school and get good marks...
Characters
Betty Cooper (cameo)

Suddenly It's Summer! (Table of Contents: 18)

In a panel on page one, Betty sings some modified lyrics to the 1947 song "It's a Good Day." ("Great day" instead of "good day", but the lyrics are obvious to anyone who's heard the song.)