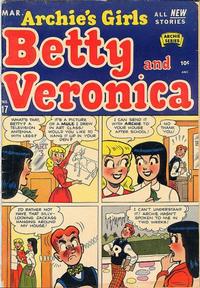 Bigger and Bitter (Table of Contents: 1)

Genre
humor
Characters
Betty Cooper; Veronica Lodge; Archie Andrews; Jughead Jones (cameo); Reggie Mantle (cameo); Adrian (photographer)
Synopsis
Betty is going to give Archie a professional photo of herself for his birthday. Veronica finds out and goes to the same photographer and has a much larger photo made of herself. The sympathetic photographer finds a way for Betty to come out ahead.
Reprints
Keywords
birthday party; photograph

First Line of Dialogue or Text
What's This?
Synopsis
Activity page: What's This?, Draw Me, Color Me, Draw the Design, Finish the Faces, Picture Words

First Line of Dialogue or Text
Sis! What do you want to take your castor oil with?
Genre
humor
Characters
Katy Keene; Sis
Synopsis
Two single panel jokes: Taking castor oil with a fork and Sis wants a rabbit to help her with her arithmetic.

Genre
humor; teen
Characters
Archie Andrews; Betty Cooper; Veronica Lodge; Jughead Jones
Synopsis
Archie gets mad when Betty knows more than he does. Jughead advises Betty to play dumb the next time she sees him, but that backfires.
Reprints

Credits from the reprint in B&V Friends Double Digest #237.

First Line of Dialogue or Text
Wonder what it's like to be married to the same man for fifty years?
Genre
humor; teen
Characters
Jughead Jones; Veronica Lodge
Synopsis
Looking at an elderly couple on a park bench, Veronica wonders what it would be like to be married for many years.
Reprints
Keywords
marriage

On the Other Foot (Table of Contents: 10)

Genre
humor; teen
Characters
Betty Cooper; Reggie Mantle; Jughead Jones
Synopsis
Reggie reads that a shoe store has a case of shoes only for the right foot. Betty remembers that Jughead bought a grab bag box at an auction that only had left foot shoes. Reggie and Betty are able to acquire both boxes, but it doesn't work out as intended.
Reprints
Keywords
shoes

Veronica does not appear. Credits from the reprint in B&V Friends Double Digest #237.

First Line of Dialogue or Text
Dear diary: I need eight more dollars to invest...
Genre
humor; teen
Characters
Debby; Oliver; Wagner Twins
Synopsis
Debby wants to earn some money for an investment. She gets a baby-sitting job, but needs some help from her father.
Keywords
baby-sitting; hair style

The Hic Parade (Table of Contents: 14)

First Line of Dialogue or Text
What are you two pondering about?
Genre
humor; teen
Characters
Reggie Mantle; Betty Cooper; Veronica Lodge
Synopsis
Reggie gives a suggestion for a motto for the girls sorority house.

"Has her number" is slang for "knows the true story."

Two jokes in unusual format. One is three panels presented as the page of an partially-open comic book. The other is head shots and text presented in negative (yellow on black) format.

One of Those Daze (Table of Contents: 19)