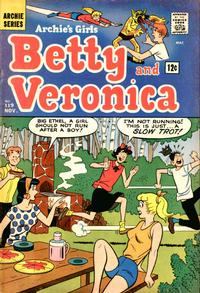 Dinner for One (Table of Contents: 1)

Genre
humor; superhero; teen
Characters
Superteen [Betty Cooper]; Waldo Weatherbee; The Consumer; Archie Andrews; Elmer Flutesnoot; Geraldine Grundy; Jughead Jones
Synopsis
Superteen battles the Consumer, an alien monster who can eat anything and anyone. She has to back down when the Consumer threatens to devour Archie, but luckily Jughead's eating power is greater than any alien's.
Reprints
Keywords
alien

The first Superteen story that isn't a dream sequence.

A note in the splash page establishes the rule that the source of Superteen's power is her ponytail.

The First Step (Table of Contents: 3)

A partial remake of an earlier story, "Ballet Ruse," from Laugh #172 (July 1965). Both stories are partly based on a scene from the 1957 movie DESIGNING WOMAN, where a dancer/choreographer played by Jack Cole beats up a bunch of thugs who are threatening Gregory Peck and Lauren Bacall.

The Driving Lesson (Table of Contents: 4)

Brush For Beauty (Table of Contents: 5)

Genre
humor; children
Characters
Li'l Jinx
Synopsis
Jinx is hopping down the street on her pogo stick. She bounces into an open manhole, but bounces back up off the hardhat of a city worker.
Keywords
manhole; pogo stick