First Line of Dialogue or Text
Not only did Archie lie to me about the size of his yacht, Betty...
Genre
teen
Characters
Betty Cooper; Veronica Lodge; unidentified hair dressers
Synopsis
At the beautician's, Veronica tells Betty about Archie's latest escapade.
Reprints 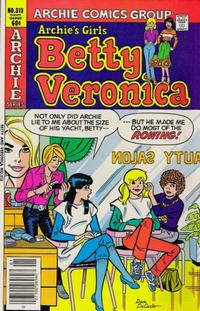 Writing originally credited to Frank Doyle; actually one of the early '80s stories written by his daughter Claire.

The Invitation (Table of Contents: 5)

Despite the logo at the beginning of the story, Veronica Lodge does not appear.

The ending of this story, where Mrs. Cooper says that Betty's aggressive behavior will give her "a lot more fun than I ever had," has been changed in recent digest reprints. In the '90s, the final balloon was re-lettered to read "that kind of behavior landed me a husband!" Another reprint, in the '00s, not only changed the final line but re-drew Mr. Cooper to remove the pipe he smokes in the final panel.

Number One Guy (Table of Contents: 6)

Betty and Veronica
Genre
teen
Characters
Veronica Lodge; Archie Andrews; Mary Andrews
Synopsis
Veronica develops a toothache and can't attend a concert with Archie, so she guilt-trips Archie into giving up the concert as well to make sure he won't go with Betty or anyone else.
Reprints

Despite the logo on page one, Betty Cooper does not appear in this story.