Some info verified using a DCM scan (http://digitalcomicmuseum.com/)
This is the first Harvey issue. 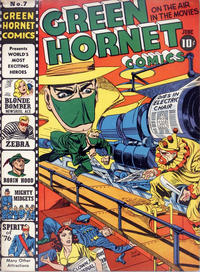 Meet Our Heroes (Table of Contents: 2)

The Case of the Murdering Clown (Table of Contents: 3)

First Line of Dialogue or Text
So long, yardbirds! I'm off on a ten day furlough! Kiss th' rest of th' boys good-bye for me!
Genre
humor; military
Characters
Daffy Drafty; Steve
Synopsis
Daffy gets a ten-day furlough and he doesn't want to see any soldiers in uniform.

First Line of Dialogue or Text
Who is it to-night, Maisie?
Genre
humor
Characters
Maisie; Felix
Synopsis
Maisie met a guy who does magic tricks.

Six cartoons (two by Strauss, one by Cooper, one by Richter, one by Al Weine, and one unsigned), and two text only jokes.

On page 1, rearrange a phrase to get a phrase meaning the opposite, solve a cryptogram, make a three-word sentence from the provided letters, connect the dots, create seven words from the supplied letters, rearrange and remove one latter to create a word that mnatches the definition, and rearrange the letters to spell eight foods.

Genre
superhero
Characters
The Zebra [John Doyle] (origin); Mary Sewell (John's girlfriend); Happy Mike (villain, political boss); Spike (villain); Slug (villain)
Synopsis
Sentenced to death for a murder he did not commit by politicians who are protecting the real murderer, John Doyle escapes from prison and turns his convict uniform into a superhero costume as the Zebra. Fearing that Doyle's girl knows something about the murder, Happy Mike and his boys seek her out to shut her up for good. But the Zebra intervenes, saves Mary and learns that Happy Mike is the true killer.
Reprints
Keywords
Daily World

First Line of Dialogue or Text
And to think I once paid ten good bucks for an auto horn that sounded like that!
Genre
humor; military