A parody of the paintings of Andy Warhol. 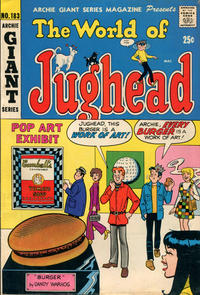 Genre
teen
Characters
Ethel Muggs
Synopsis
While bowling with the other girls all Ethel wants to do is talk about boys.
Reprints
Keywords
bowling

Given the Business (Table of Contents: 3)

Genre
teen
Characters
Pop Tate; Archie Andrews; Jughead Jones
Synopsis
Pop Tate says he'll give Jughead the store when he retires. Shortly after, strange accidents happen around Pop Tate, and he believes that Jughead and Archie are trying to get him to retire.
Reprints

Credits changed to reflect the credits from the reprint in World of Archie Double Digest (Archie, 2010 series) #65. Bill Vigoda was an artist not a writer so previous credits were almost surely incorrect.

Genre
teen
Characters
Mr. Weatherbee; Miss Grundy; Archie Andrews; Jughead Jones; Harry; Pop Tate; Veronica Lodge
Synopsis
Mr. Weatherbee needs to go to a school board meeting, but he's expecting the gardeners to show up with some chemical fertilizer so he asks Jughead to wait and tell them to put it on the front lawn.
Reprints

No Trespassing (Table of Contents: 9)

Using the Head (Table of Contents: 12)

Genre
teen
Characters
Jughead Jones
Synopsis
Jughead is inspired to paint after being hit on the head with an apple.
Reprints

Credits from the reprinting in Jughead's Double Digest (Archie, 1989 series) #197, no credits printed in this digest.