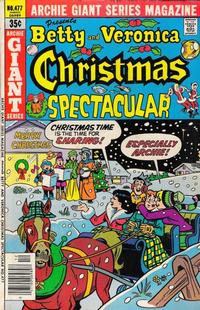 Cartons of Joy (Table of Contents: 1)

Genre
humor; teen
Characters
Betty Cooper; Veronica Lodge; un-named family; un-named kids
Synopsis
Betty and Veronica are out enjoying the sights when they see a young boy longingly looking at a train set in a store window. Seeing that he looks poor, they feel sorry for him and follow him to an old shack where he lives with his mom and siblings. Even though the family seems happy, Veronica decides she's going to bring happiness into their lives. The next day, she and Betty go on a shopping spree - buying a refrigerator and washer for the mom, and toys for the kids. To make sure the kids think it's from Santa, they have everything delivered after the kids will be in bed.
Reprints
Keywords
Christmas

Script and Pencil credits from the reprint in Betty and Veronica Double Digest Magazine (Archie, 1987 series) #238.

Genre
humor; children
Characters
Li'l Jinx; Roz; Greg
Synopsis
Li'l Jinx asks Roz for her opinion on the snowman she just built. Roz gives her opinion - like she was an art critic judging a painting. When Greg asks Li'l Jinx whether or not Roz liked it, Li'l Jinx says "Beats me!"
Reprints

Genre
humor; teen
Characters
Betty Cooper; Archie Andrews; Veronica Lodge; Jughead Jones
Synopsis
Three two-panel gags. First gag - Betty believes that it's better to give than to receive, so she gives Archie a gift certificate good for a dozen kisses from her. Second gag - Veronica is out shopping and says she wants to get something for Archie, so Betty asks how much she wants for him. Third gag - Veronica admires her bowling ball-shaped gift, saying that she's always wanted a bowling ball. Betty whispers to Jughead that she thinks she used too much wrapping paper on the golf ball.
Reprints
Keywords
Christmas; Gag

Genre
humor; teen
Characters
Jughead Jones; Betty Cooper; Veronica Lodge; Archie Andrews
Synopsis
Betty decides to go into the gift-wrapping business for the holidays, and sends Jughead out to show off her sample boxes. Jughead decides to start with Archie. Veronica sees him and asks if those are Betty's and where he's taking them. When Jughead tells her that they are Betty's and he's taking them to Archie's, Veronica assumes that Betty has purchased all those gifts for Archie, and that she's trying to make her look cheap by buying Archie more gifts.
Keywords
Christmas

Genre
humor; teen
Characters
Miss Geraldine Grundy; Mr. Waldo Weatherbee; Betty Cooper; Veronica Lodge
Synopsis
Miss Grundy and Mr. Weatherbee agree to let the girls be in charge of the school's Christmas decorations. Betty and Veronica decide to start with boxes of Christmas decorations in the old storeroom in the basement. As they're unloading, they come across some mistletoe, so they hang some above the door to Study Hall, and pounce on Archie with smooches when he walks under it. A little while later, Veronica finds a Santa suit and puts it on, only to have Betty show up in an identical suit.
Reprints
Keywords
Christmas; mistletoe

Credits from the reprint in World of Archie Double Digest (Archie, 2010 series) #64.

From the Heart (Table of Contents: 10)

Credits from the reprint in Betty and Veronica Double Digest Magazine (Archie, 1987 series) #278.