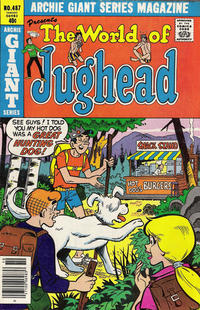 Genre
humor; teen
Characters
Archie Andrews; Jughead Jones; various un-named Riverdalians
Synopsis
As they're returning home after seeing a UFO movie, Archie and Jughead start discussing life in space, and keep mistaking various objects for UFOs - a pizza, a plate (thrown out the window by someone who's tired of a cat carrying on outside his window) and an iridescent frisbee. As they continue their walk home, a real UFO flies in front of them, but they refuse to believe that it is actually a UFO. Annoyed that the earthlings refuse to acknowledge them, the aliens contact their base and say they're heading to a different planet where residents are more hospitable.
Reprints
Keywords
UFO

Credits from the reprint in Jughead and Archie Double Digest (Archie, 2014 series) #20.

Genre
humor; teen
Characters
Archie Andrews; Jughead Jones; un-named Riverdalians
Synopsis
Archie walks by Jughead's backyard, where Jughead is lying in a hammock, making strange motions with his hand. When Archie asks him what he's doing, Jughead responds that he's practicing for that night's championship. Archie walks off, assuming Jughead was giving him a silly answer due to his silly question. In the last panel, we see Jughead at the Valley Pinball Championship, using the same motion he was practicing earlier to pull the plunger on the pinball machine.
Reprints

Genre
humor; children
Characters
Li'l Jinx; Roz
Synopsis
Roz is busy painting and comments that making the paintings has made her exhausted. The gag comes when the painting is revealed - consisting of one large green dot and a smaller red dot.
Reprints

Characters
Jughead Jones
Synopsis
Readers must black out the letters A, B, C, F, G, I, J, K, M, P, Q, V, X and Z to find the answers to each of three different riddles.
Reprints
Keywords
Puzzle

Oceans of Love (Table of Contents: 6)

The Balancing Bungler (Table of Contents: 7)

Classic Samm [Sam] Schwartz gag in the first panel - in the background, he can be seen peaking over a hill, holding up a "Vote for Sam" sign with his picture on it. Art is identifiable as Samm's (especially with the gag).

Be an Archie Club Member (Table of Contents: 9) (Expand) /