Who Dares Defy -- the Demi-Men? (Table of Contents) 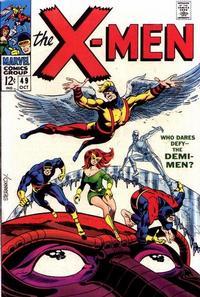 First Line of Dialogue or Text
Eerie feeling--returning to the house that was our headquarters!
Genre
superhero
Characters
X-Men [Cyclops [Scott Summers]; Marvel Girl [Jean Grey]; Angel [Warren Worthington III]; Iceman [Bobby Drake]; Beast [Hank McCoy]]; Lorna Dane (introduction); Mesmero (villain; introduction); Demi-Men (villain; introduction)
Synopsis
Angel, back at the X-Mansion, learns that Cerebro is active and has detected a high level of mutant activity. Angel contacts Marvel Girl to alert her to his findings and she rounds up the X-Men to search for the heightened source of the mutant activity. As the X-Men search, Iceman is left behind to keep an eye out on a stranger he recently rescued.
Reprints

X-Men rejoined as a team

A Beast Is Born (Table of Contents: 3)

The Origins of the Uncanny X-Men! part 12, origin of the Beast part 1, page 1 of this story is not reprinted in the Amazing Adventures #17 and X-Men: Mutations #nn reprints.

Stop the Presses! Here's Some Scoops and Scuttlebutt to Knock You Outta Your Teepee! (Table of Contents: 4) (Expand) /