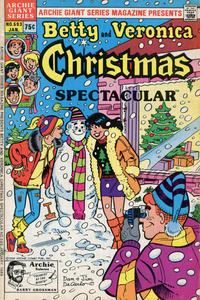 A Stitch for Time! (Table of Contents: 2)

Genre
humor; teen
Characters
Betty Cooper; Veronica Lodge; Hermione Lodge; Smithers
Synopsis
When Betty gives Mrs. Lodge an embroidered handkerchief as a thank-you gift, Veronica is jealous, and struggles to embroider a similar gift herself. Mrs. Lodge recognizes that she's been so busy that she's been neglecting Veronica, and commits herself to spend more time with her daughter.
Reprints
Keywords
Christmas; holiday

The Dilton portion removed in most reprints.

Genre
humor; teen
Characters
Betty Cooper; Veronica Lodge; Archie Andrews; Jughead Jones; auctioneer; Mr. Kelly (locksmith)
Synopsis
Betty bids $10 for a locked trunk at an auction, then finds out that the contents are worthless. The locksmith, however, gives her $1500 for the trunk, suggesting to Archie and Jughead that at Christmas good things happen to good people.
Reprints
Keywords
Auction; Christmas; holiday