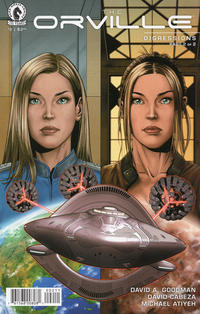 Genre
adventure; science fiction
Characters
Commander Kelly Grayson; Admiral Halsey; Commander Ed Mercer; Lt. Gordon Malloy; Captain Griffith (The Orville); Commander Newton; Lt. Commander Bortus; Lt. Talla Keyali; Lt. Commander John LaMarr; Captain Al Mosley (U.S.S. Jefferson); Cassius; Doctor Claire Finn; Ty Finn; Marcus Finn; Klyden
Synopsis
From her knowledge of the future, Kelly realizes that the Kaylon take-over of the Orville and their attack on Earth is imminent, and it will be successful because in the altered timeline, Dr. Finn never served aboard the Orville and she was key to stopping the attack. Kelly tries tries to warn Admiral Halsey, Talla, and LaMarr about the attck, but no one believes her. Feeling that she has no other choice, Kelly resigns her commission and makes plans to get Dr. Finn to the Orville. Meanwhile, Ed and Gordon find their outpost attacked by the Kaylon and narrowly escape into space.
Keywords
the Kaylon; The Orville

A younger Kelly travelled from 7 years in the past into the present in the episode "Tomorrow, and Tomorrow, and Tomorrow". She was sent back to her own time and her memories of the future were supposed to be erased, but the memory-wipe did not work, and her knowledge of the future influenced her to make different choices, leading to an altered time-line as shown in "The Road Not Taken". This story details the changes to the timeline that occurred as a result of her decisions and continues in the episode "The Road Not Taken".

The Kaylon originally captured the Orville and attempted to attack Earth in the Season Two episodes "Identity" Parts 1 and 2, but they were stopped in the original timeline.