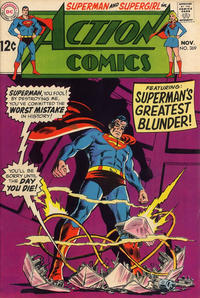 Genre
superhero
Characters
Superman; Sentinels; King Thork
Synopsis
Superman decides to return to Earth and defeat the Sentinels, believing that some other mastermind must be behind their efforts to eliminate crime on Earth. Once they are destroyed, be learns that their motives were indeed pure, and crime and warfare return because of his own actions.

The Adventures of Tiger Boy (Table of Contents: 2) (Expand) /

The Boy Who Broke Supergirl's Heart! (Table of Contents: 4)

Genre
superhero
Characters
Supergirl [also appears as Linda Danvers]; Gary Sparks; Claire Valton
Synopsis
Linda decides to use her super-powers to teach a lesson to Gary Sparks, the campus Casanova, but instead she falls for him herself.
Reprints
Keywords
Stanhope College

The Wonderful World of Comics / promo (ad from the publisher) / 0.67 page (report information)