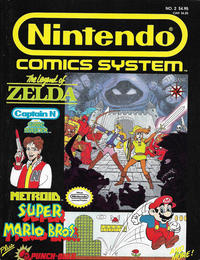 First Line of Dialogue or Text
We have quite an issue for you!

The Legend (Table of Contents: 2)

Betrayal Most Proper (Table of Contents: 3)

Welcome to Videoland (Table of Contents: 4)

The Master Machine (Table of Contents: 5)

First Line of Dialogue or Text
In the massive central power core, heart of the Palace of Power and the greatest source of energy in Videoland.
Genre
science fiction; superhero
Characters
Captain N [Kevin Keene]; Eggplant Wizard; King Hippo; Mother Brain; Princess Lana; Master Computer System
Synopsis
The computer system that controls the Palace of Power's defenses is reprogrammed to think Princess Lana is Mother Brain. Captain N must fight through the Palace to rescue the Princess before the computer terminates her.
Reprints

The First Fight (Table of Contents: 6)

One name from the credits ("Diane Dua") appears to be cut off by a strip of yellow spanning the top of the page.

Fox and Hounds (Table of Contents: 7)

First Line of Dialogue or Text
Another night... another fight.
Genre
sports
Characters
Doc Lewis; Little Mac; Super-Macho Man; Vonnie; Reg
Synopsis
Little Mac is drawn into high society by a beautiful fan. Her jealous ex sets up a gauntlet event, where Little Mac runs through the city while fighting off one hundred men - with the final opponent being Super-Macho Man.
Reprints
Keywords
boxing

The Legend of Zelda (Table of Contents: 8)

Queen of Hearts (Table of Contents: 9)

First Line of Dialogue or Text
The Death Mountain area of southwest Hyrule.
Genre
adventure; fantasy-supernatural
Characters
King Harkinian; Link; Princess Zelda; Queen Seline
Synopsis
Link and Zelda rescue Seline, queen of a neighboring country that is Link's homeland. She has lost her powers and come to Hyrule in search of help. They take her to meet Zelda's father, the king of Hyrule, and learn the two royals have not seen each other in sixteen years.
Reprints

The Coming of a Hero (Table of Contents: 10)