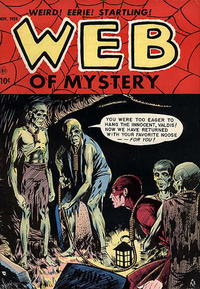 One Door from Disaster (Table of Contents: 1)

Genre
horror-suspense
Synopsis
The cop Mike Young arrests a beautiful vampire lady named Velma. He is seduced by her and falls in love. He helps her overcome her vampire heritage, but the untroubled togetherness will not last.
Reprints

Genre
horror-suspense
Synopsis
"Little is known of the fabulous situation which existed many centuries ago in the foothills of the Andes mountains of south America..."
Discovering a king's burial chambers, three explorers confront living mummies and one of the men is captured and made into another mummy.
Reprints

Valley of the Scaly Monsters (Table of Contents: 3)

Genre
horror-suspense
Synopsis
In the steaming Amazon jungle, "Creature from the Black Lagoon"-like creatures kidnap a woman from an expedition. They drug her and want to make her the queen of the lizard people. Her boyfriend intervenes and buries the creatures under an avalanche of rocks.
Reprints

Jim Vadeboncoeur refers to this artist, Frank Giusto, as "Ace" Baker, a Matt-Baker-Imitator, who worked for ACE.

Genre
horror-suspense
Synopsis
"Paris was in the throes of a fearful crime wave in the summer of 1893..."
A son imitates his father's crimes and is beheaded by the wax dummy of the executioner who beheaded his criminal father 30 years earlier.

Genre
horror-suspense
Synopsis
The witch Zita must supply Satan with men's souls. To this purpose Zita runs a derelicts' home, the "Mission of Lost Souls", forcing her residents into a pact with the devil. The reporter Sam Brant goes in undercover and puts an end to Zita's evil reign.
Reprints

The Brass Talisman (Table of Contents: 6)

Genre
horror-suspense
Synopsis
Psychologically blocked painter Varsko murders the hypnotist Lorenz, who helped him overcome his blockage by use of a magic talisman. Now in possession of the piece, Varsko makes a fatal slip-up.

Enigma of the Unscheduled Passenger (Table of Contents: 7)

Genre
horror-suspense
Synopsis
Lucinda Dell meets stranger on a train. When he gets off, he leaves his wallet. The woman investigates. A murder mystery unravels. In the end the wrongdoer gets exposed.
Reprints

ENIGMA OF THE UNSCHEDULED PASSENGER is a retelling of a segment of "Four Star Playhouse" called "The Man on the Train" which was telecast 15 Jan. 1953 a year prior to the magazine date. The role of Lucinda Dell is played by David Niven as a London businessman who meets a stranger on the train. Also, Daniel Cohen authored "Railway Ghosts and Highway Horrors" which also includes this story, so says IMDB. This episode is also on the DVD collection "Four Star Playhouse, Volume One."."