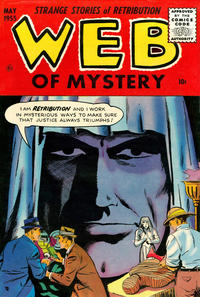 The Haunted Three (Table of Contents: 1)

Curse of the Mummy (Table of Contents: 2)

The Scarlet Curse (Table of Contents: 3)

Synopsis
A witch takes over the body of another woman, but can be shot by the police.
Reprints

The Sabre of Gregory Tamoric (Table of Contents: 4)

Synopsis
In a trial of courage, Gregory Tamoric is supposed to stick a sabre into a grave at midnight on the local cemetery. He accidentally pierces his long cloak with the weapon, trips, falls down and dies of shock - thinking a skeleton has grabbed his foot.
Reprints

A. A. Wyn, publisher and business manager, and M. J. Phillips, editor.

Genre
crime
Characters
Retribution (host)
Synopsis
Dennis Hilton murders for money, but his conscience haunts him. He kills himself when confronted with the police.
Reprints

Power signature on original story which was untitled. Reworked and censored to meet approval of the Comics Code Authority.