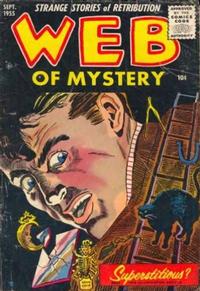 Deep into Darkness (Table of Contents: 2)

Genre
crime; fantasy-supernatural
Synopsis
Three gangsters on the run get lost in the woods and are caught by the police.
Reprints

Originally untitled. Artwork and text have been tampered with to meet censorship restrictions.

Genre
horror-suspense
Synopsis
"Among a certain noble family of Scotland, there was a legend..."
If a family member hears the beating of drums, another member is stricken by tragedy. It so happens.
Reprints

In the original the young woman dies.
Here she is only "seriously injured". Her eyes in the final panel are drawn open instead of closed.

The Doorway to Yesterday (Table of Contents: 4)

Genre
horror-suspense
Synopsis
While staying in Rome, american newspaperman Wilson follows a beautiful stranger through the ruins and enters the "doorway to yesterday". He finds himself in ancient Rome and (at the command of Nerissa) has to battle a gladiator. Wilson wins and can return to the present.
Reprints

In the original Wilson dies in an airplane crash, caused by mysterious Nerissa.

Genre
non-fiction
Synopsis
Discussion of symbols of superstition like the horseshoe, the cat, the number seven or whistling at sea.

Conscience in the Witness Chair (Table of Contents: 6)

Genre
crime; horror-suspense
Synopsis
Innocent scientist is framed for murder and sentenced to die on the electric chair. His innocence can be proven in the last minute.
Reprints