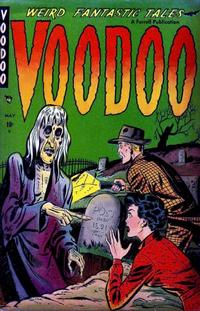 The Shelf of Skulls (Table of Contents: 1)

Matt Baker credit added by Peter Croome (August 2007) based on style of artwork.
This is apparently a reworked South Sea Girl story, possibly hitherto unpublished, with Alani's name changed to "Olani" and the Vanishing Islands changed to "Banishing Islands".

The Golden Ghouls (Table of Contents: 2)

Artist's signature is blacked out in this printing.

The Werewolf (Table of Contents: 4)

The Haunted One (Table of Contents: 6)

Genre
crime
Synopsis
Ellen thinks she is being haunted by her late uncle Caleb Flint, but he's not really dead, just in cahoots with Zachary Shrigg to collect the insurance payout from his "death." With Dr. Trimm's help and protection, Ellen survives the plot to knock her off and transfer her inheritance to Shrigg.
Reprints

This is probably a hitherto unpublished "Grimm - Ghost Doctor" story from BOMBER COMICS with Grimm's name relettered as Trimm.